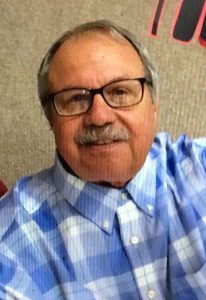 Howard Walter Hawthorne of Seabrook, TX passed away September 3, 2019 in Houston, TX. Howard was born on December 9, 1946 in Catskill, NY. He has been a resident of Seabrook for the past 23 years, but his heart never left New York.

After working as Curator of Mammals at the New Orleans Zoo in New Orleans, LA and overseeing the beginning of its magnificent renovations, Howard went to work for Cooper/T Smith (CTS) Stevedoring in New Orleans. After 14 years, Howard left CTS to work as a consultant with the Port of Albany in Albany NY.

A battle with cancer made it necessary for him to retire, but he continued to remain active in the Maritime industry.

Howard was an Eagle Scout who never lost his love of the outdoors. He enjoyed fishing, swimming in his pool, and reading. Ever the entertainer, Howard loved cooking feasts for his family from his extensive cookbook collection. He was, also, a lifelong loyal Cleveland Indians fan.

There will be a memorial service at St. Thomas the Apostle Episcopal Church in Nassau Bay, TX on Saturday, September 28 at 10:00 am.

In lieu of flowers, the family requests that donations be made to B.I.G Love Cancer Care, an organization that works with Texas Children’s Hospital, providing love and support to cancer kids and their families. (biglovecancercare.org)