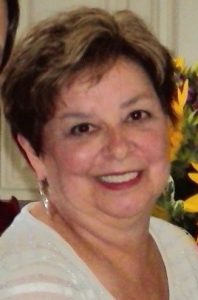 Carol Elaine Trimble Kieschnick knew who she was and what she wanted – to be a wife and mother.  From her family’s perspective, Elaine was the best on the face of the Earth at both.  Born on May 4, 1946 in East St. Louis and raised in Taylorville, Illinois, Elaine (as she was known by her family and friends) meticulously created cut-out paper dolls of a husband, wife and children when she was a young girl with dreams of making a family of her own one day.  Elaine later often said that, as hard as she tried to cut those paper dolls perfectly, she never imagined that she could build a family as special as her actual tight-knit bunch which consisted of her husband, Rev. John H. Kieschnick, and her children, Jonathan, Kimberly and Jason.

There was nobody (and never will be anybody) quite like Elaine.  Married to John in Springfield, Illinois on July 4, 1970, Elaine pursued her ambition of constructing a family and raising kids in Irving, Texas where John pastored at his first church and in the Clear Lake area beginning in 1974 where the family moved when John accepted a call to pastor at Gloria Dei Lutheran Church.  As a wife, Elaine was a stable, solid foundational rock on whom John could securely rely to hold down the fort as John excelled in his ministry.  Elaine was a far cry from the stereotypical pastor’s wife (as silent submission was not her thing).  Elaine liked to shake things up a bit with her borderline-devilish sense of humor and her frequently vocalized opinions concerning virtually all topics except for politics or sports about which she did not care a lick.  As a mother, Elaine was a trailblazer and a fierce protector.  Elaine brilliantly employed unorthodox parenting methods (e.g., in quelling a fight between Jonathan and Kimberly, Elaine once required that the combatants sit down on the couch right next to one another, hold hands and exchange compliments until laughter at the creative “compliments” replaced the anger giving rise to the conflict).  Elaine confounded speech therapists with a special language and novel pronunciations that Elaine used to communicate with Jason.  Elaine had no reservations about utilizing corporal punishment.  However, at the root of any of Elaine’s disciplinary measures was love and devotion.  Up to the moment of Elaine’s death, Elaine gave anything and everything that she had to her family.

After leading her kids through their formative years, Elaine embarked on a long career in the Clear Creek Independent School District primarily as a Principal’s administrative assistant.  Elaine extended and commanded respect in that capacity.  She exuded motherly love (and some old-fashioned discipline as necessary) to the students.  Elaine also formed deep and long-lasting bonds with her co-workers who Elaine adored and to whom Elaine dispensed advice and opinions about love, life, morality and relationships often bewildering those within earshot as to how Elaine could get away with vocalizing such strong sentiments without causing a scene or jeopardizing the friendship.

Elaine’s physical life on this Earth came to a close on September 21, 2020 surrounded by her family in her League City home.  Elaine was preceded in death by her dear father, Roscoe Carroll Trimble, and her extraordinary mother, Lorraine Gilmartin Trimble.  In addition to her husband and children, Elaine is survived by daughter-in-law, Olga Vladimirovna Kieschnick, of whom Elaine was so proud, by her sister and brother-in-law, Marilyn and Jim Rigney, who Elaine loved and admired, by her niece, Christine Rigney, who Elaine treated as Elaine’s own baby when Christine was born and who Elaine always loved like a daughter, as well as scores of Kieschnick in-laws, out-laws, nieces and nephews who lovingly embraced Elaine from the day that John brought Elaine to Texas.  In lieu of flowers or other gifts, it was Elaine’s wish that contributions be made to the Endowment Funds at Gloria Dei Lutheran Church in Nassau Bay, Trinity Lutheran Church in downtown Houston or South Lake Church in League City.  A private, family celebration of Elaine’s life is scheduled.

As the end of Elaine’s life neared, Elaine was inundated with cards, messages, Facebook posts and calls from incredibly compassionate people who were a huge part of why Elaine loved her life so much.  One common theme expressed in those kind sentiments was that many people felt that Elaine was her/his “best friend” or that Elaine loved her/him the “most.”  This was among Elaine’s great legacies – making people feel that they were the best or loved the most.  In these divisive times, we should live as Elaine did in order to serve as a reminder that being loved abundantly and to the max is available to all – no matter race, gender, orientation, political party or nationality – by and through Jesus Christ with whom Elaine now peacefully and painlessly resides in Heaven.