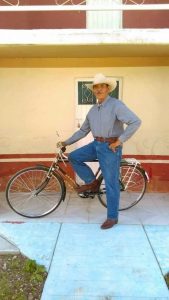 Manuel Leyva Meave, 82, resident of Bacliff, Texas passed away September 22, 2020 in Webster, Texas. He was born October 20, 1937 in Paso Blanco, Pinos Zacatecas, Mexico to parents Francisco Leyva Macías and Petra Meave Ibarra. Manuel was a member of Shrine of the True Cross Catholic Church in Dickinson, Texas. He worked twenty years in Mexico and thirty years in the United States.

A visitation will be held from 2 p.m.-6 p.m. on Sunday, September 27, 2020 at Crowder Funeral Home in Dickinson, Texas with a funeral service beginning at 5:00 p.m. He will be buried at a later date at the community Cemetery, in La Cruz, Pinos Zacatecas, Mexico.