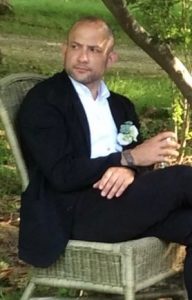 Eric was a talented, multidisciplinary writer, philosopher, teacher, musician, and filmmaker.  From the age of 7, he was dedicated to training in various martial arts, consistently establishing himself as an accomplished competitor in tournaments, and becoming a 6th degree black belt in karate.  He published essays on racism, incarceration, education, and emancipation in The New York Times, The Mantle, The Atlantic, and other newspapers and magazines. He participated as a sound designer and performer on various theater productions.  A tireless advocate for prison reform, he dedicated many years to the project of creating The Museum of the Incarcerated American, an installation aimed at expanding the public debate around mass incarceration.  Eric was a passionate, dedicated, committed educator. His courses addressed hard questions and complex material and approached the classroom with great responsibility, openness, and a willingness to learn continuously.

Eric loved all living things, enjoyed many travels throughout the world, and making many dear friends along the way.  He was known by all as a kind, compassionate and loving person.  He sometimes used the name Eric Anthamatten-Dominguez to honor his beloved Mother as Dominguez was her maiden’s name.  Eric is survived by his parents:  Fred and Mary Anthamatten, brother Dustin Anthamatten, sister Kara Cranfill, her husband Allan Cranfill, their children Isabell and Philip, and numerous uncles, aunts, cousins, and lifelong friends and colleagues worldwide.

Eric set the groundwork for continuing his work for education of the incarcerated.  In lieu of flowers, donations may be made to The Eric Anthamatten-Dominguez Memorial Fund. The Eric Anthamatten-Dominguez Memorial Fund will support the Education Department at The Fortune Society. The Fortune Society’s mission is to support successful reentry from incarceration and promote alternatives to incarceration, thus strengthening the fabric of our communities. Through his life work, Eric embodied this mission. https://donate.fortunesociety.org/give/343398/#!/donation/checkout