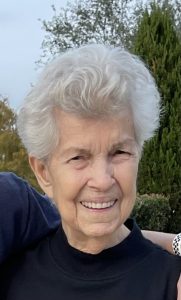 Hazel T. Ponds was born October 3, 1932 to the parents of Enodier and Esma Barras in Napoleonville, LA. Hazel went to be with Jesus and with her grandson Shane on June 17, 2022.

Hazel and Edward Prestidge moved to Dickinson, TX in 1967 where they raised their daughters Theresa and Carla. Hazel most years was a homemaker while also owning and running the “Poly-Clean Washateria and Dry-Cleaners”.

Anyone who knew Hazel, knew that she had a passion for cooking and baking. She expressed her love by cooking for others and her family, who enjoyed her cooking for years as well. Hazel loved playing in the yard with her flowers and tomato plants, which is a passion that she passed on to her daughters. She loved watching the “Astros” and eating popcorn with her grand dog Dallas by her side, whom she would share the popcorn with.

Hazel was a devoted wife, Mother, and MaMa. She was a member of Shrine of the True Cross in Dickinson since 1967.

As her daughters, it always made us proud whenever we went to Dickinson. People would comment how friendly and caring a person our Mother was.