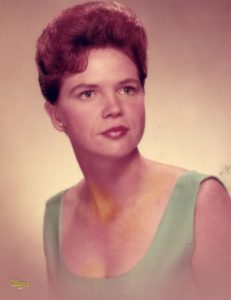 Judith Rae (Toland) Lohrer was born to Frank Allen Toland and Corraine Ione (Cheshier) Toland on the thirteenth day of March, 1937 in Houston, Texas. Judy passed from this life in her home on June 23, 2022 in Santa Fe, Texas surrounded by family and loved ones.

Judy attended Austin High School in Houston, Texas where she was a member of the Scottish Brigade.

In 1953 Judy married Benny Joe Moore, with whom she had three children, Alice Rae, Jody Kay and Joseph Michael. The marriage dissolved some years later. Life’s winds blew Judy into the arms of William F. (Bill) Lohrer, who she shared a life with until his death in 1994. Mom and Bill lived in Houston and then a small community called Bleakwood, just outside of Kirbyville, Texas.

Judy worked at Methodist Hospital in Houston in the admin department until she and Bill moved to Bleakwood. It was then that she went to work for the county of Newton in the Mental Health and Mental Retardation department. In this she found her passion for working with special needs people. She followed this passion and went on the work for the Kirbyville School District, working with special needs children. After the death of her husband, Judy returned to the Houston/Pasadena area and worked at Hope Village caring for people with special needs once again, until her retirement.

Mom was fiercely passionate about her family and doted on her grandchildren and great-grandchildren. She loved her pets and always had a dog. Mom was also pretty great at gardening and always had an abundance of plants and flowers. She enjoyed music and had a great sense of humor. My pet name for her was Red and she loved it.